Robert 'Umberto' Walker is the owner of Signs by Umberto. A sign-writer as well as an educator, Robert specialises in reverse glass sign making based in Huddersfield, West Yorkshire, UK. ​ The name derives from a name given to Robert at a young age by his father. Robert has four brothers in total and their Dad has a name for each of his sons that has links to films. ​

Robert began sign writing in 1991 at the age of 14, working with a sign writer from Bradford in West Yorkshire, to paint large wall pieces for the Eureka children's museum in Halifax, West Yorkshire. Robert quickly fell in love with typography and painting at a similar time and soon began to study art and design before eventually he began to teach typography on design courses across Yorkshire after completing a Master's Degree in International Graphic Design Practice as well as a Post Graduate Certificate in Lifelong Education. ​

Robert specialises in hand crafted sign making known as Verre Églomisé, a process of applying both a design and gold onto the rear face of glass as well as hand painted sign writing and large scale typographic murals. 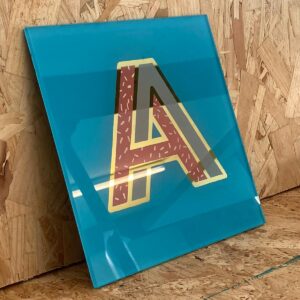